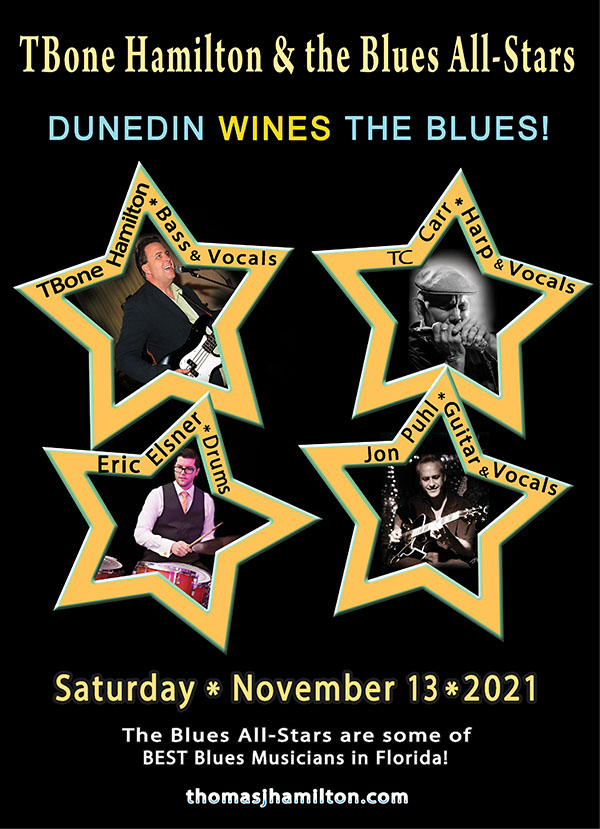 TBone Hamilton and the Blues All-Stars is a band comprised of the best blues musicians.
Led by Bassist/Vocalist – Tom “TBone” Hamilton (TBone Hamilton’s Big Easy Revue, The Swinging Johnsons, Rock Bottom & the Cutaways) the band is always evolving and revolving as the scene is constantly changing.

TBone stated at that time:
“I have been in the music business for the past 25 years. Over this time span, I have met great musicians, many of whom I call friends. As time was going by, I came to the realization that some of them were passing away, and I strongly felt that I had to capture the sound of these “local” cats while they were still here and “blowing” as good as ever. This was the genesis for the Blues All Stars.”

TBone Hamilton has released his first music video “My Babe” in 2020. His 4th produced album entitled “A Tribute to Willie Dixon” was dedicated to one of his bass playing heroes – Mr. Willie Dixon.  In addition, TBone has been featured, with many over of the top blues acts in Florida, on the cover of a national blues magazine discussing his contributions to the American art form of Blues on the West Coast of Florida.  He maintains an active performance schedule including leading his 8-piece Big Easy Revue Band, and straight ahead Jazz concerts.