Zen Willie Sessions – 2013 In the first session I had the fortune to get some of best blues musicians in America. They all were enthusiastic to record the music of Willie Dixon. On Harmonica – D.W. Gill from Maine. I had played with DW in the past, and he was in town on a mini tour so the timing was perfect to have him record. If you have a great harmonica player you have to record “My Babe”. On guitar, I have my long time friend blues guitarist Steve Burdi. I met Steve Burdi the same day I met Rock Bottom many years ago! Steve laid some tasty blues on all of the tunes, and nice nod on “Hoochie Coochie Man”. On drums, my rhythm section partner from Rock Bottom and the Cutaways, Glenn Evans. This song was an on the spot slow blues tune. I wanted to give D.W. Gill on harmonica and Steve Burdi on guitar, a chance to stretch out. On drums – Glenn Evans my rhythm section partner from Rock Bottom and the Cutaways, puts down a killer groove with some nice raves ups. This is an original by the band called “Lightning II”. Glenn came up with the name as a follow up to “Lightning” from our recording session with the late Harmonica man – Rock Bottom and guitarist Ronnie Earl. The “Lightning” track was released on Rock Bottom & the Cutaways “Too Many Habits” Album in the mid 1990’s.

TBone Hamilton and the Blues All Stars
57 views
Facebook 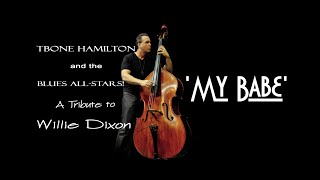